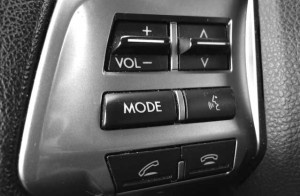 Previously, I was using an iPhone 4S on iOS 7 and every time I started the car, the phone would automatically connect to Bluetooth. Worked great.

I switched to an iPhone 5S on iOS 8 and that stopped working.

I tried deleting and re-pairing through the radio about a dozen times. Still didn’t work.

Finally, I remembered the audio pairing option available through the steering wheel control. Turns out, I think I had maxed out the number of connected devices there. Apparently, the radio and audio settings don’t interact with each other.

I talked through the BT setup options, deleted all the devices I had installed there and re-paired my iPhone.

Need to find a string nestled somewhere in a ton of subdirectories? First cd to the lowest common denominator, then run:

The Nexus One Car Dock is well constructed and sturdy. It communicates with your phone via Bluetooth.

It works ok, but there is one show-stopper in my book. NO LINE LEVEL AUDIO OUT port. If you want to connect it to your car stereo and listen to audio, you have two options:

That means, when you get in your vehicle, you must cradle the phone then plug in your cable to the top of the phone, adjust the volume up (since it’s not line level). To get out of car, unplug the headphone cable, and uncradle the phone. I know, I know… this is not a “problem” experienced in developing countries. But COME ON Google… for $55 I should be able to drop the phone in the cradle, turn on my car stereo and drive.

Worth noting; when charging, the phone gets pretty warm. Not so hot you can’t hold it, but much warmer than my iPhone ever got.

More to come… these are just my initial thoughts.

The desktop dock is sturdy and attractive. Comes with an extra power cord (so you can use the one from the phone elsewhere) and an audio out cable (1/8 -> RCA).

When you cradle the Nexus One, it launches the “clock” app which shows time, date, weather, next alarm (if set) battery charge level and a row of icons at the bottom for Alarms, Gallery, Music and Home. After about 10 minutes, the screen goes black and the time, date and next alarm are shown in dull green (suitable for beside the bed).

Charge time from a completely drained battery takes about three hours when plugged into the wall.

My only complaint with the desktop cradle is the bottom lip that holds the phone from sliding out. It should be 1-2 millimeters taller. Sometimes if you press the screen near the top (like pulling down the info pane), it causes the phone to “pop” out of the cradle onto the desk.